This year Torklift International welcomes Captain Ray Van Horn to our sponsorship program. As founder and host of the Gypsy Angler television show on the Sportsman Channel, the captain travels throughout the states showcasing information for viewers interested in fishing techniques and tactics.

"One of the most important additions I've added to my CampLite truck camper set up are Torklift International StableLoads,” said Captain Ray Van Horn. “I realized the difference in better handling immediately. StableLoads also dramatically reduced truck sway that I had experienced before installing them. I have traveled all over the country in my truck camper filming the Gypsy Angler fishing show towing a number of different boats -- StableLoads have provided unbelievable stability.” 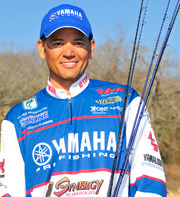 Professional bass fisherman James Niggemeyer joined the Torklift International sponsorship program this year. James is from Texas and has been a tournament fisherman for 14 years. He's been featured on ESPN and other major media outlets as an expert at his sport.

“I spend a lot of time on the water and quite a bit of time behind the wheel getting to those destinations,” James explained. “The people from Torklift International manufacture the finest in towing equipment for truck campers and just about anything else you can dream up. I have tried the others and I am happy that I now have the best tools for the job. The SuperHitch, SuperTruss extension, StableLoads, Original Fast guns and complete tie down systems make my rig far more stable. With this new equipment I’m road ready and safe! I am happy to be a part of the Torklift International Team!”

Brian Brawdy and the The Green RV

A former New York police investigator who has spent the last 20 years studying philosophy, psychology and comparative religion, Explorer Brian Brawdy now turns his energies to spreading the message of ‘Conservation through Exploration’ while reminding us that “Exploration is the sign of a healthy mind.”

Since purchasing his 1181 Lance Camper, personally designed to harness the natural energies of the sun, wind and rain, he has traveled North America full time in his RV. Referred to as an ‘Environmental Pioneer,’ ‘Outdoor Adventure Expert’ and ‘Green RVer’ Brian’s 2008 Wonder Explore Believe Tour took him to 48 states in 10 months with over 100 personal appearances and 70 television news segments.

To learn more about Brian and his Green RV, please visit his website at BrianBrawdy.com.

"Torklifts heavy duty, easy to use and does not hurt the truck at all! Peace in mind! It fits my situation perfectly because I have to tow a boat all the time. Every fishermen should have them!" 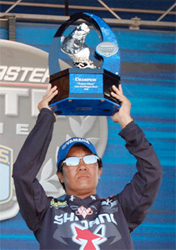 After his amazing year in 2008 Kota Kiriyama was awarded a brand new truck, and pickup camper. Kota came to Torklift looking for a solution to be able to tow his boat that he uses for tournaments, behind his new Truck Camper setup.

Torklift outfitted Kota with the SuperHitch and SuperTruss combination, as well as the Camper Tie Downs, and our top of the line camper turnbuckles the Original Fastguns.

To read more about Kota and his fishing adventures, please visit his website.

"I use the best gear when I climb the biggest mountains in the world. I am going to use the best tie-down system out there to protect me when I am off the mountain."

Greg travels the globe year round as a Lead Guide for IMG. He enjoys leading programs on Mt. Rainier, including the Winter and Denali Expedition programs in early season.

When not guiding on Rainier, Greg is active in the Himalayas with 2 successful accents of Cho Oyu, 1 ascent of Lhotse and a first ascent in Tibet.

Greg has also enjoyed successful climbing on Denali, Kilimanjaro, Mexico and Aconcagua. Before embarking on his current career, Vernovage played and coached collegiate volleyball and has had the opportunity to be involved in two Olympic Games winning a gold Medal in the 2000 Sydney Games.

Greg and his team IMG recently summited Everest on May 12th! Click here to read all about the latest summit complete with over 100 photos!

At 17, Holly Clarke of “Just for Fun Racing” is one of the winningest drivers on the west coast. Holly got her racing start when her father, Kevin (of Adventure RV LLC in Chillliwack, B.C.), would take her to watch him race - and then started a team for the kids.

Holly’s first ride was an older gas fed car. It was usually the slowest car, but she was just thrilled to be driving. Holly’s brother, Travis, races on the “Just for Fun” racing team, which also has a 75 Camaro driven by Carlo Briglio, the team mechanic. Kevin is the crew chief. The team name is no mistake- Holly says " winning isn’t everything, just having fun" was the expectation from day 1.

After moving along from her successful Jr. Dragster career, Holly has been driving her 68' Chevy Nova that runs a whopping 114 MPH!

Holly’s many accomplishments include:

Today, Holly is starting her 10th season of driving has decided to make a career of drag racing. “I’m starting to pursue my dreams. I am addicted to the adrenaline!” Holly says when asked about her racing career. Holly’s long range goals include racing and modeling full time as a career. She also enjoys working out, boating, sea dooing, learning about new cultures, languages, nutrition and music.

To find out more about Holly and the rest of the team at their website Just For Fun Racing. 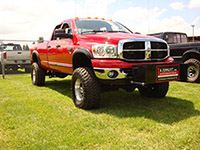 Sled pulling is a competition using tractors and large trucks to pull a heavy sled along a 'track' and is very popular in rural areas. Usually the sled offers progressively greater resistance as it is pulled. It is a great spectacle. The pulling vehicle produces a great deal of noise and smoke, and tends to kick up dirt. The trucks travel about 300 feet. (a typical "full pull" is 300 feet). There are many different classes, from "factory" trucks, to custom built vehicles (modified).

Today's sleds use a complex system of gears to move weights up to 65,000 pounds. Upon starting, all the weights are over the sled's rear axles, to give an effective weight of the sled plus zero. As the truck travels the course, the weights are pushed forward of the sled's axles, pushing the front of the sled into the ground, synthetically creating a gain in weight until the truck is no longer able to overcome the force of friction.

Amber Holt is the the Owner and Master Instructor of Backcountry Basics. She has found instruction in all forms a very rewarding compliment to her life’s passions. Her instructional background began in her early teens as Professional Equine Trainer and then evolved into the Ski and Snowboard Industry as a Professional Coach and Instructor. At age 23 she joined her local Fire and EMS services where she proceeded to gain higher levels of training credentials as a result of working up ranks.

In addition to these experiences and an immeasurable level of passion for backcountry snowmobiling, life’s lessons, a college education in the area of Aeronautical Science, Business and Marketing, Business Owner, and what she holds most grateful to is her amazing mentor, her Husband, Budd.

These factors combined built the pillars and pedigree behind the foundation of what Backcountry Basics Snowmobile Clinics has become today.

From Amber's very first snowmobile ride with Budd in Alaska to the present, it has been a personal pursuit to develop and refine an educational means that would allow her to share with others that incredible experience and reward that backcountry riding has to offer. 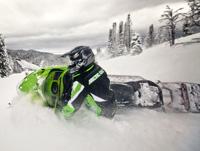 Her greatest enjoyment as an instructor comes from possessing the instructional skills and tools that can enable other riders to overcome their own apprehensions, fears and frustrations. These factors are often the paralyzing roadblocks to enjoying backcountry riding to its fullest.

Amber finds it a great honor to assist in another rider's breakthrough moment when they confidently overcome these blockades and recognizes their endless capabilities! 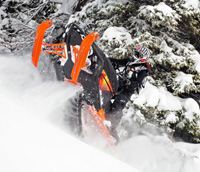 It is Amber's hopes and aspirations to take Backcountry Basics to a level that can be utilized as a worldwide educational resource, and continue to inspire to any skill level of rider, while continuing to strengthen the snowmobiling industry. With the support of Arctic Cat Snowmobiles and 40 plus aftermarket companies Backcountry Basics is able to reach Amber's vision!